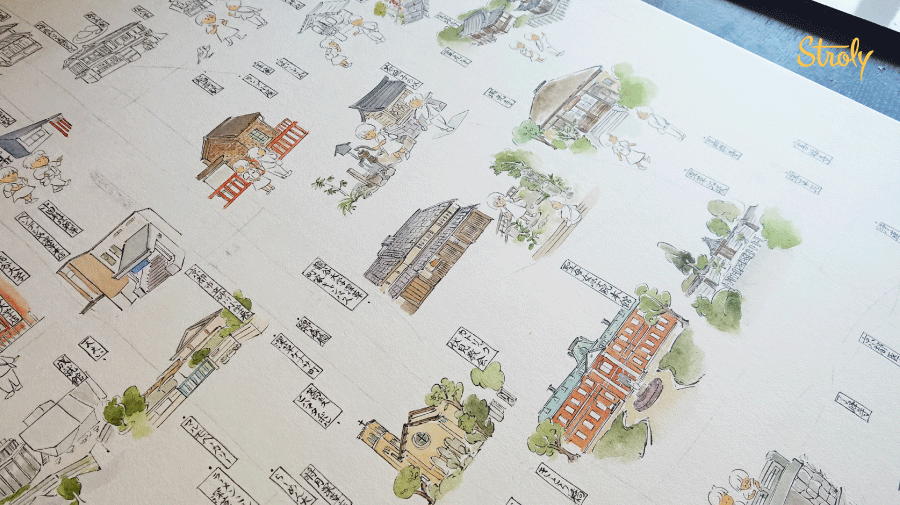 How a Map Is Made Yuka Mori × Ryukoku University

Do you know how a professional custom map is made?

This seems to puzzle a lot of people. Probably the majority have the opportunity to see or use maps, but a few have made one.

So, let me unravel the mysterious world of “map production” by walking you through the process of how the “Fukakusa & Inari Waking Map”, a map of Ryukoku University’s 380th-anniversary project, was made!

The big mission we received from Ryukoku University was to create a map that would enhance the charms of the Fukakusa/Inari area, Kyoto!

Additionally, the project had two more goals to achieve. First, the university wanted the students to share with the general public the charms discovered by them. The next goal was to deepen the connection with local population. The university wants locals to recognize the potential power of the area and seek interactions with them by actively using the map.

To complete the mission, we asked Ms.Yuka Mori, a Kyoto based illustrator and expert of the Kansai area, to join the project.

She is the creative mind behind various maps of Kyoto, such as the Kibune/Kurama area map used in the Keihan Railway’s 1-day ticket or Shimohiga Newspaper’s map of the East Shimogyo-ward area.

Together with her, we started this project of making an enjoyable map for students, locals and tourists.

Before we proceed, there are two questions we absolutely needed to learn from the client.

1.What is the area specifically you want to include in the map?
2.What landmarks/spots do you want to show with illustrations?

These are essential keys to start making a map. Once we have answers, we go for the local coverage!

On a hot day in August when the midsummer sun was shining, we interviewed some locals with Ms.Yuka Mori.

On our first day, we pretended to be tourists walking around the area and took a chance to survey which areas are reachable by foot.

We found many charming walking paths where cars can’t go through. To access them you do have to deviate from the main roads. For those who love walking, these streets would be a great walking route.

As we strolled around, we tried to get a sense of what made that area special to us. We interviewed the owner of “Tanka(丹嘉)”, the only Fushimi doll shop in Japan, visited a Jizo statue of a deity named “Nurikobe Jizo”, who you can pray to not suffer from cavities, and were amazed by the “Gohyaku(500)-Rakan Statues” of Ito Jakuchu at Sekihoji-temple.

It might sound simple, but “walking around and experiencing the area by yourself is the best advice we can share.You will feel the atmosphere of the area and many things that aren’t found on the Internet or in magazines.

On our second day, we changed the means of transportation from walking to bicycle and went for more interviews.
Because the range of areas we could go to was expanded, we went places that initially had been out of reach. Also, we were able to notice things like streets with heavy traffic. We wouldn’t have noticed this if we had just been walking around.

Another tip here! If you are doing interviews, make sure to take pictures of all the places you visited and the dishes you ate.
Take shots from various angles because you will need many references when you draw.
Also, take notes on the impressions or feelings that you get. It will be a great help later when you create a map.

Once we completed our research, we proceed to a rough sketch.
In the process of your rough sketch, you will build the whole structure to share, confirm, and correct the map with the project team as well as client revisions.

This process could be very different between business and personal work.
We carefully check and have a consensus on the purpose and the corrections. This will reduce later changes and keep them to a minimum.

[From a rough sketch to a draft]

This was the first rough sketch. As you can see below, the illustrations are mostly gathered towards the center of the map. As a result, the north and south sections of ​​the map seem empty. And because we were thinking of adding some characters to the map, we needed to make more space … But, we were able to get a full picture for this first sketch!

To clear some of the density in the middle and to show each landmark clearly, we went and resized up the paper. Additionally, we fused the bottom part where the illustrations looked separated from each other and created a good balance.

Also, we added an illustration of “Kakeuma Shinji (an acrobatic horseback riding ritual)” to the Fujinomori Shrine that is located in the south of the map.

Here, we added more east-west (left to right) streets to balance out the many north-south (up to down) streets we already had drawn in the sketch.

Moreover, we decided on the main characters that would appear in the map. Having characters in a map is one of Ms.Yuka Mori’s trademark features.

The characters are a boy and a girl who come to enjoy walking around the area.

With these candidates for the main characters, we decided on the third image. A boy with a camera delivers a good message of an excited student who is ready to explore the area.

We made several fine adjustments, such as adding a gate to Sekihoji-temple and corrected the illustration of the horseback riding ritual at Fujinomori-shrine.

At this point, we found there were some blank spaces at the corners.
We wanted to use them effectively and included the beauty of the four seasons in this area. Even though the project was done during mid-summer, together with Ms.Yuka Mori, we imagined the sceneries in each season and discussed ideas such as including cherry-blossom in Keage Incline or autumn foliage in Tofukuji-temple.

Also, we adjusted the location of the waterways and how to indicate comments.

Ms.Yuka Mori drafted the map on a piece of paper for submission and revision. We received a request from Ryukoku University asking enthusiastically to add four motifs modeled on the four gods with Fukakusa tiles at the corners.

They look more easygoing and softer with the touch of Yuka Mori’s style. How cute!

With the draft done, let’s take a look at how Ms.Yuka Mori finished up the work with using ink!

The ink made the lines are enhanced, and the impression you get from the map changes drastically. The whole image seems to give more a sense of completeness.

Next, let’s move on to coloring. Let’s head over to her atelier and take a look!

[Visit to her atelier! ]

She colors the illustrations carefully one by one.

As you may have noticed, she doesn’t color the character’s clothes and the streets at this stage.
She decides what colors to use after evaluating the balance of the whole map.

She checks the photos she took as a reference to her illustrations. When she writes captions for the characters, she thinks back to the conversation or experience she had during research.

I had a chance to ask her about the project. Let’s learn a bit about her.

– What is your favorite part of this map?

I like the illustration of Fujinomori Shrine’s “Kakeumashinji” modeled after the Fushimi doll. I enjoy the vivid color! I also like “Manju Kui Ningyo( A doll eating manju)”. I’m fond of it because I met a craftsman who makes them.

– Is there anything you find it difficult to draw?

I’m experienced drawing old buildings but drawing new ones is challenging because I’m not used to it.

Furthermore, the Jojukan building Ryukoku University was still under construction, so I drew it using the CG image for the planned construction. It was hard to imagine the different angles of the building that wasn’t built yet.
I was drawing and thinking, “Are you sure about this? I’m going to draw it anyway!” Lol.

– What left you the most impressions after the research?

The Gohyaku(500)-Rakan stone statues made by Ito Jakuchu in Sekiho-Ji temple was very interesting.
According to an old quarterly magazine named “Ginka” that I happened to own, it was made by Jakuchu and his apprentices during his later years. It is said that he decided the shape of the statues according to the shape of the stone.

I think he carved on stone because stones would last longer than paintings.
I’d recommend visiting to everyone.

A few days after I visited her atelier the map was completed, and a scanning specialist performed an ultra-high-definition scan. Once the data had arrived, it was our turn to work on it.

Because we were going to show the map in 3 languages, Japanese, English, and Chinese, we wrote captions in English and Chinese in a separate sheets to later synthetize them on a computer.

You can control the Landmark Pins by pressing the “ON / OFF” button on the right side of the bar.

If you tap the Landmark Pins with a book icon, you can see detailed and interesting information of the local spots, mainly about “Fushimi Doll” made by the students of Ryukoku University.
You can also see Landmark Pins with lunch spots in the Fukakusa / Inari area.

On October 1st, there was also a ceremony in front of the “Ryukokudai-mae Fukakusa Station” of the Keihan Railway line and we had the chance to present the map to the locals and even to the Mayor of Kyoto City.

The map is displayed with signage just outside the ticket gate of Ryukokudai-mae Fukakusa Station permanently.

I hope the map will be used by many people.

I was able to get a view of the behind the scenes of cartography, but once again, I felt like there was a lot to learn still.
The method of making maps can vary greatly depending on the artist or the designer, but I would be happy if you find this article to be useful to get some clues on creating a map yourself.

If you have a chance to go to Fukakusa or Inari area, make sure to use the “Fukakusa & Inari Waking Map”! You will surely be taken to a place you have never known before.

Graduated from Kyoto City University of Arts, she is an illustrator with roots in Japanese style painting. Her style features delicate lines and unique characters. The Kibune and Kurama maps are just some of her works with Stroly. She is also known as Yuka Mori(森夕香) as an active Japanese style painter. A work exhibition will be held in November 2019.

In commemoration of the 380th anniversary of the foundation of the University and the change of the station’s name, this project was created by Tadatomo Seminar, the Faculty of Policy Science of Ryukoku University, to enhance the charms in the Fukakusa/ Inari area.