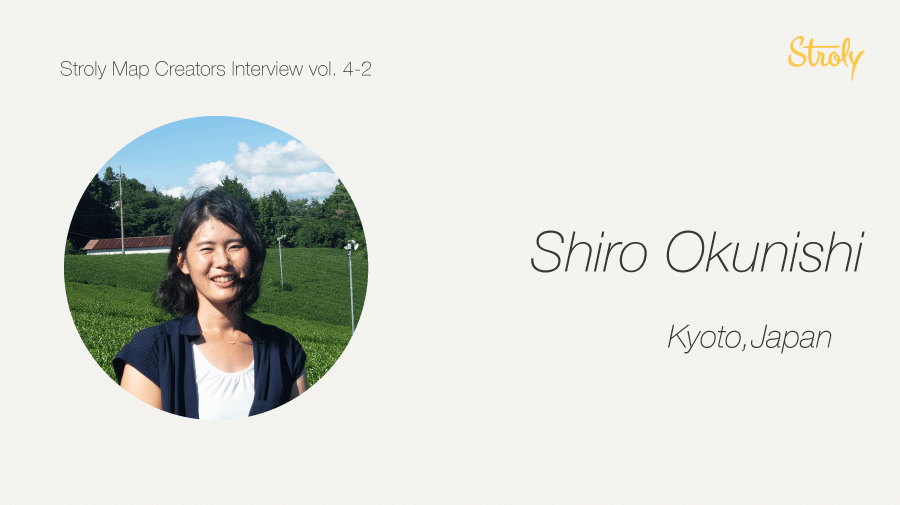 This is the second part of the interview with Mr. Shiro Okunishi. Previously, we learned that she emphasizes on using her own experience to create a good map.
(Click here for Part 1: A Japanese map artist who shares the charm of different regions! Interview with Ms. Shiro Okunishi Part 1)

Now, let’s ask what design work left the deepest impression on her.

– What project left the biggest impression on you?

I especially like this map.
It was made with Katazome, a Japanese stencil dyeing technique and stamps.
Katazome is done by rubbing paint on the part you want to dye with a brush.
Sometimes I paint in black so I can scan asmonochrome in my computer.
When I have fine patterns, I use stamps because they are hard to achieve with stencil dyeing.

A renovated nursery school turned cafe-restaurant called “Yamano Table”, publishes a free paper called “Yamabiko”, and the map was made for it.
Unfortunately, I can’t upload some work-related maps to Stroly, but I’m making many maps at work.

-How long did it take you to make this map?

I think it took less than 2 weeks. I remember that I didn’t have a set delivery date for this map.

-I see. I’m not good at drawing streets, and I usually trace them from a standard map. How do you draw, for example, this street?

I didn’t trace but just roughly drew it. Sometimes when I need to be accurate, I trace lines for streets.

I have another map here, “Murasampo(Village Walk)”. The booklet comes with a walking guide map.
The booklet and map was made by gathering stories from residents of the village. In the first booklet, our team captured historical information and memories from locals related to a local elementary school, now closed.
We are a team of three people, but mostly I do everything, like interviewing, editing, and designing.

-This is very cute! Is this watercolor?

Yes! It’s a watercolor.
The former version of this map is called “Tayamap”. I uploaded it to Stroly.
During an event that took place in 2016, I heard some people wanted to walk around the village so I made the map.
I made one based on a very detailed history book of the region. I borrowed it from the grandpa that is drawn here.

Murasanpo No.2 focuses on a small village that sunk because of the construction of a dam.
The mapmaking process wasn’t easy.
I found a map-like chart at the time, but I couldn’t fully use it as a reference because the main streets and paths for forests or farming were all mixed up. So, I asked around people who knew the area from that time and finally made a map. It wasn’t accurate, but I think it’s close to the real thing.

-Wow, you’re right. It’s hard to see which street is used for what purpose. You upgraded the map!

Definitely. I also added stories that I heard during the interviews.
I drew illustrations with a pen and colored on a computer.

-Do the residents who were used to live in the village sunk for the dam construction now live around here?

Yes, I interviewed nine residents, seven of them are from the village. As I did the interviews, I found many pictures of the village.
I was motivated because I thought, “If I didn’t do anything, the stories of the village would disappear.”

-I’m sure that there are many other villages that have disappeared or have lost records from maps.

I’m sure several regions had disappeared especially because of dam construction in Japan.
A map with some old photos may not be attractive, but it becomes interesting when it includes real stories about the village.
During the process of making “Murasanpo”, I transcribe the whole recording because how they tell the stories is part of their culture.

-Thanks for sharing your works. Is there anything you want to accomplish a designer in the future?

I’ve always wanted to make a tea plantation map. Still, I haven’t taken action toward it.

-What images or ideas do you have for the tea plantation map?

I want to make it for tourism. There are a couple of things one needs to be careful about, for example, you can’t enter tea plantation without permission. So, I was thinking of introducing manners for viewing the tea plantation on the map.
Also in the countryside, many roads can take you nowhere. Sometimes that worries me, so making a map to specify which roads to use will be useful and reduce difficulties for sightseeing.

-That sounds so interesting! I look forward to the tea plantation map. You have created many maps for villages such as “Tayama Map” and “Minamiyamashiromura Map”. What attracted you and led you to live in this village?

I am city-bred, and I have longed for the countryside since I was little.
While traveling all over Japan, I was thinking about where would be a good place to live.
I was not thinking of living here from the beginning. It was a total coincidence that various events led me here.

In fact, I first moved to a town called Kasagicho that is located next to the village.
Then, because of a project for a roadside station in 2017, I used to commute here and eventually got married.
I enjoy living here because there are many interesting migrants and locals.

-Who is the target of your maps?

Someone interested in Minamiyamashirocho and willing to come and visit.
In the countryside, I think all tourists or locals can be tourist ambassadors who introduce and share the charm of the place. So, it’s important that each person has great experiences in the village, brings friends along, guides around village, and makes more and more fans of the village. I’m working on various activities, thinking about what could be one of those opportunities.

-Your maps narrate the charm of the village very well. They’ll surely help get people interested in the village.

I think a map is the most effective way to share the message.
If someone asks you “What’s the place like?”, You can just show a map saying “Here it is”.

-I think it’s more thoughtful to give a map than a text-based book or pamphlet. Maps can be a good tool to let them take actions right away.

I created a paper fan as a gift in commemoration of the opening of bypass highway and included an illustrated map in it. Also, I designed an illustrated map for the original duct tape sold at a roadside station. When it comes to creating something related to the village, I tend to design maps.

-Is that because you want to communicate what you know about the village to others using something designed by you in the form of a map?!

Exactly. For example, the tea plantation is a big part of this town, but I’m not convinced to design it only because there is more to see.

-You mentioned that creating a tea plantation map is one of your goals. Are there other dreams as a map artist?

I wish the number of users who take action as a result of my maps would increase.

-Sounds great! We, Stroly, also want to provide opportunities for users to change their habits or experiences by using our maps. Any message to Stroly?

I think Stroly’s activities and services are interesting, so I will continue to look forward to it.

-Thank you for today! We are looking forward to your new maps.

Including the maps we introduced here, you can find her map collection on Stroly.

Make sure to take a look!