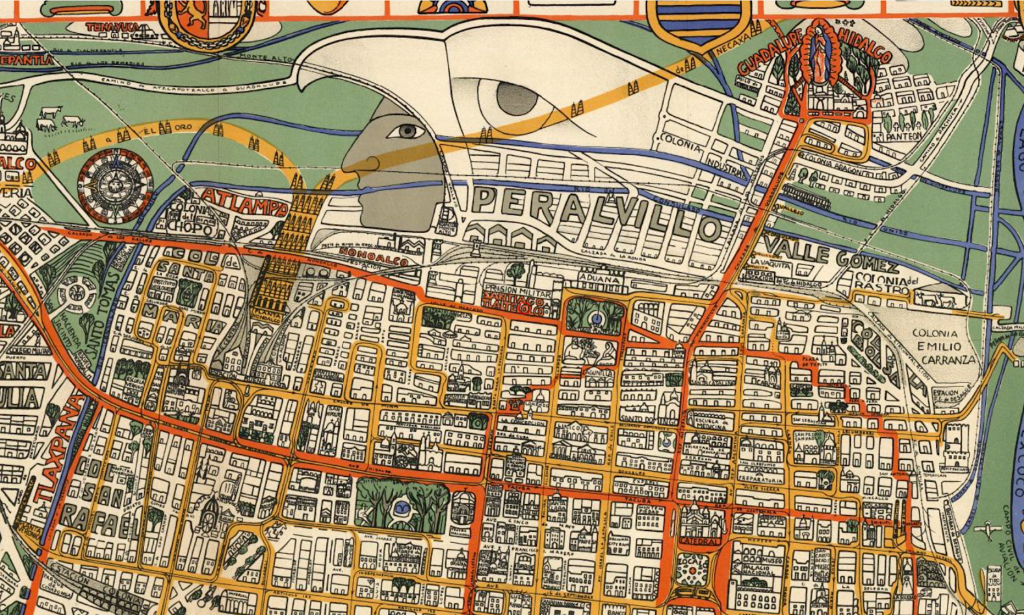 A map of México today and yesterday

If I can talk for hours about something, it would be about history, map illustration, and female leadership. And when picking a topic to talk about in our blog this month, I found one that combined them perfectly!

So today, I’m bringing you the fantastic story about this map and its creator.

I hope you enjoy it!

Emily Edwards (October 7, 1888– February 16, 1980) was an artist, historian, teacher, and even a puppeteer during her astounding life. Born in San Antonio, Texas but trained in the Art Institute of Chicago, she arrived in Mexico in 1926 to further develop herself as an artist.

The 1920s was an exciting time to be in México because an art moment called Muralism was taking place. The painter Diego Rivera was one of the most influential muralists during this period.

Emily became his mentee during the skyrocketing years of this movement, and in 1931 she was commissioned by the Mexico City Transit and Power System Co. to create a promotional map.

By the 1930s, almost all traces of the ancient Aztec capital had been built over. After decades of devastation due to wars, impoverishment, and political instability, the efforts were intended to bring the country out from the shadows and join the modern world.

Emily worked on this project for a whole year. She wanted to faithfully represent the tram and transportation system but also portrait the history of the city while incorporating Mexican cultural iconography. Talk about an ambitious design goal!

But the results paid off since Edwards combined cultural and historical themes with a post-modernism style. And while at first glance you might think this is just another colorful artistic map, there is a complex story within it.

The maps show us the transportation routes in yellow and orange, with contrasting elements in blue and green. Not only does this esthetic decision enhances the composition, but it serves as a highly useful feature of the map.

Along the border, we can find pictures of ancient Aztec Codice symbols (think Egyptian hieroglyphics) of neighboring districts. She managed to combine the old with the new with a sense of both traditional and contemporary style at the same time.

Not only that, but she also draws your eyes to the figure of Cuauhtemoc, the last Aztec emperor who perished under the hands of the Spanish invaders. This symbolism is very profound, like trying to remind us that the remains and spirit of the ancient city of Tenochtitlan are still beneath it all.

This map reminds of a moment in history on which the effort to reconnect with roots was necessary. I can sense a strong social and political statement on this map, which is why it’s one of my favorites!

Maps are always a reflection of the perspective of time, and they have a lot to teach us about the space we live in. From the historical point of view, we can gain fascinating insights into some very different cultures by looking at their maps. From the design point, we can see the popular artistic trends as well as the design thinking skills used at the time.

See you next time!